白薇秀和欧萱 - 谁才是真材实料’新阿姐’？Jeanette Aw or Joanne Peh - Who will make the cut as the ‘New Ah-Jie’? 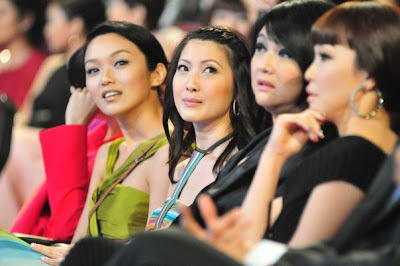 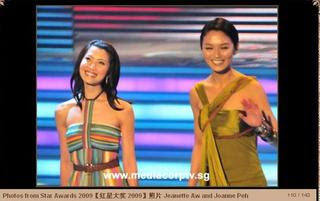 There is an explosion of comments and countless forum discussions on Joanne Peh and Jeanette Aw.First, it was all about Joanne winning the Best Actress award last Sunday and now, it has expanded to debating if she should be the more deserving 'New Ah-Jie' instead of Jeanette Aw.
‘New Ah-Jie’ is defined as someone very popular and always being considered as the 1st choice (or one of the first choices) to carry any new drama. She should be able to have the media consistently reporting about her in the news (regardless of good or bad). The hype on this star should be ‘phenomenal’. She should also set the internet forums ‘on fire’ with discussions on her consistently. She should be nominated for, or won Best Acting awards in any kind of award shows. If she can sustain such feverish hype and consistency in the positioning, she is the ‘New Ah-Jie’.
Jeanette Aw, with all the hype on her after ‘The Little Nyonya’, definitely qualifies for the title (she was also nominated for Best Actress at Asian Television Awards). The role ‘Yueniang’ has become a ‘classic’ and people will remember ‘Yueniang and JA’ many decades later. At this moment, she is certainly the ‘New Ah-Jie’. But, this positioning is fragile because she will need a second big drama to successfully seal it.
Joanne Peh is definitely the biggest star of Star Awards 2009. To be able to beat hot contender Chen Liping and hot favorite Jeanette Aw, she proved it wasn’t just luck. Many Executive Producers will want her even more in their next productions. She was already ‘in-the-news’ with all sorts of controversies even before the award. Grabbing home 3 awards (Best Actress, Top 10 and Most Stylish) on national TV, her ‘achievements’ matched up to the hype that once made Fann Wong. Yes, she is also the ‘New Ah-Jie’ at this moment.
The remaining 2009 will determine if any one of them will ‘break’ or ‘make’ it. Joanne already bagged a role in the 180-episode drama ‘Your Hands in Mine’ (but not a role that will become the ‘talk-of-the-town’ type). She will be seen every night for 9 months non-stop starting November. Jeanette has no new drama role yet but has diversified into doing a musical and endorsing many commercial deals (we hear rumors of a movie deal). It will be interesting to see if Joanne or Jeanette will become ‘the chosen one’ to play the lead role in the year-end blockbuster drama (mainly set in the 60s-80s) which requires the stars to play roles from18 – 40 years old.